Is plastic surgery in Thailand safe?

Posted at 04:55h in Uncategorized by mybeau70 0 Comments
0 Likes
Share

Thousands of Australian women are jetting to Thailand for cosmetic surgery every year – but is it safe?

Thailand is a hub of booming multi-billion dollar medical tourism industry Every year there are 15,000 Australians who travel to Thailand to undergo affordable cosmetic surgery. Among them include 37-year-old Cindy Briese who found her body was never the same since giving birth to her two kids when she was a teenager.

The beauty therapist from Melbourne opted for a nose job and a ‘mummy makeover’ package, which includes breast implants and a tummy tuck. This all for the estimated price of $12,600. While these low-costing surgeries are what attract medical tourists in Thailand, there is a feeling of unease among Australian experts who are troubled by the commercialisation of these cheaper medical procedures overseas.

Aussie mum Cindy Briese flew to Thailand for a nose job and a ‘mummy makeover’ package, which includes breast implants and a tummy tuckThe 37-year-old found that her body was never the same since giving birth to her two kids when she was a teenager

Ms Briese looks dramatically different after her nose job, breast implants and tummy tuck and says it was the desire to consign to history her padded bras and Spanx pants that prompted her to go under the knife. The petite 37-year-old had her son, 19, and daughter, 14, as a teenager herself and her body never properly recovered, she told Daily Mail Australia. ‘We all nip and tuck every day by wearing padded bras and Spanx, this is just a permanent solution to what we do every day,’ she said. 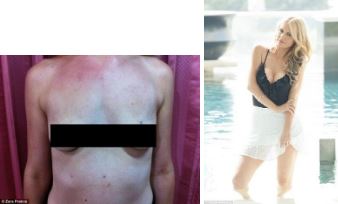 Zara Pratico, of Sydney, is among the 15,000 Australians who fly to Thailand every year in pursuit of affordable cosmetic surgery. Thailand is today the hub of a booming multi-billion dollar medical tourism industry, which pulled in a staggering $4.31 billion in revenue in 2013

Zara Pratico is along with other clients including a 39-year-old event manager for rhinoplasty and new teeth, a mum of three for another ‘mummy makeover’ (tummy tuck, breast augmentation and lift), and a flat-chested waitress looking for a boost. It took three hour for doctors to transform the 24-year-old’s breasts into 10DD.  Days later, as she returned from a shopping trip in Bangkok with bags full of new bikinis and clothes, Zara from Sydney said her breast augmentation was ‘the best thing I ever did’.

‘I lost 25kgs and overnight I lost my bust too. It’s amazing how having a chest again has restored my confidence. It was something that felt important to me. I used everything from water bras, to chicken fillets and extra padding, to disguise my deflated chest. If you can fix something, why not?’ 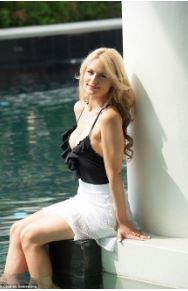 She is just one of the 15,000 Australians who jet to Thailand every year in pursuit of affordable cosmetic surgery at the hands of highly qualified surgeons for often a third of the price of the equivalent procedure in Australia.

Thailand, which once bore company with dodgy back street surgeons and unsafe practises, is today the hub of a booming multi-billion dollar medical tourism industry, which pulled in a staggering $4.31 billion in revenue in 2013.

Dr Tim Papadopoulos, the president of the Australasian Society of Aesthetic Plastic Surgery, describes the recent hype over medical tourism – cosmetic surgery in particular – as a ‘global health bazaar’.

He told Daily Mail Australia the lack of regulation makes it difficult to pinpoint exactly which destinations are most popular among Australians, although previous studies show that local medical tourists have travelled to South Korea, India, Philippines, Malaysia, Singapore and Thailand. 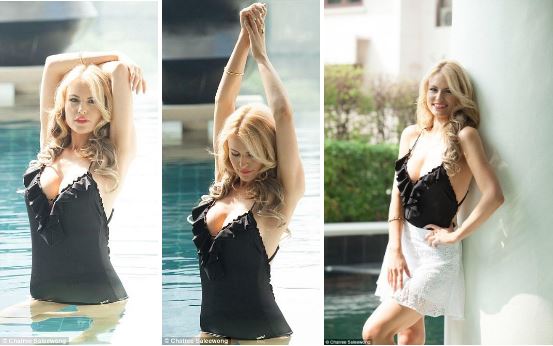 Zara, 24, from Sydney, says, glancing down at her chest: ‘It’s the best thing I ever did,’ adding, ‘I feel like me again.’ Zara travelled to Thailand to have her breasts augmented to 10DDs

What’s most distressing for Dr Papadopoulos is that medical tourism companies are subject to little oversight and not obliged to undergo accreditation.

‘Commercialisation of cosmetic surgery and medical tourism threatens our efforts to convince the public that medicine is not a commodity or a trade,’ Dr Papadopoulos said.

‘It emphasises positive outcomes and downplays the pain and risks of medical intervention.

‘This raises ethical questions about the exploitation of vulnerable patients by those who have the fiduciary responsibility to act in patient’s best interests.

‘We are also concerned with the potential for spread of exotic, infectious diseases to Australia from medical procedures performed abroad.’

And he’s seen firsthand the ‘good, the bad and the ugly of medical tourism’.

‘Most times patients get good results but we do deal with a number of patients who come to us for complications from overseas procedures,’ Dr Papadopoulos said.

‘Some of the important risks patients should be aware of is whether they are going to an appropriate institution or facility,’ Dr Papadopoulos said.

‘They should also know about their doctor, whether they are properly qualified and whether the plastic surgery is board certified.’

Amid warnings over cosmetic surgery abroad, a woman fell unconscious while undergoing a procedure at The Cosmetic Institute at Parramatta in western Sydney on Friday morning.

The woman, believed to be in her 20s, was rushed to hospital in a serious condition after going into a suspected cardiac arrest during the procedure.

The 39-year-old before (left) and after reshaping her nose (right) and fixing the deviated septum for $5,000 at Bangkok’s Piyavate Hospital

Whilst under general anesethtic, she opted last minute for an $800 upper eye lift, a cosmetic package totalling $9,800, compared to a princely $14,000 she was quoted for rhinoplasty alone back home

January is a busy time for medical tourism in Bangkok, when New Year resolutions have been made and when women – and increasingly men – book medical tours abroad for a cheap nip and tuck.

On tour, in pursuit of the same dream for a perfect image, is events manager Kelly Browne, 39, from Sydney, who first visited the country six years ago for a mini nose job and dental work in Phuket.

Then it cost the garrulous singleton $3,500 for two crowns and four veneers, instead of the $1,500 per tooth she was quoted in Australia.

This time, she is in Bangkok to add six more veneers to her Hollywood smile at state-of-the-art dental clinic DDS [$4,000] and to reshape her nose and fix the deviated septum for $5,000.

Whilst under general anesethtic, she opted last minute for an $800 upper eye lift, a cosmetic package totalling $9,800, compared to a princely $14,000 she was quoted for rhinoplasty alone back home.

‘I’ve been here and done it before,’ Kelly said from behind bandages recovering in her bed at Piyavate Hospital, a day after surgery.

‘I was young and naive then but it worked out and I got to see that the hospitals are better than the ones back home, and so much more sophisticated.

‘I still was not comfortable with my nose, I hated the angle from the right and always posed in pictures showing my left profile.

‘Result, I’ve had three procedures [$9,800] for less than one I was quoted back home. I’m going back to Australia a changed woman.’ 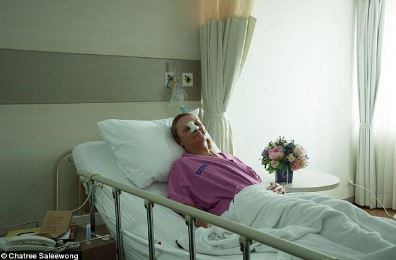 The inexorable desire to reverse the ravages of time, effects of pregnancy, as well as sheer vanity, are what attract cosmetic surgery patients to Thailand.

Mother of three Terrin Illingworth, once an astonishingly sculpted body builder, signed up for a mummy makeover after witnessing her physique morph over the years with the birth of each child.

As the weight piled on, she tipped the scales at her heaviest at 109kgs, until last year when she returned the gym and shed a impressive 30kgs lifting weights and running.

Now the student nurse and midwife is acutely conscious of how saggy she looks and has taken out a loan to pay $7,300 for an extended tummy tuck, a breast lift costing $4,200 to boost her 10 Cs to DDs and a $3,800 breast augmentation.

Terrin, 33, from Caloundra on the Sunshine Coast, Queensland, undergoes surgery on Wednesday.

She told Daily Mail Australia: ‘When I told my GP how much the cost of the procedures were in Thailand, he was gobsmacked and told me I should “absolutely” go to there to have it done. Just a boob job alone would have cost me $12,000 on the Sunshine Coast.

‘I was a body builder and I want to get back on stage in nine to twelve months.

‘After a year of feeding my 20-month old son Oscar it’s time to reclaim me again.

‘I’m a nurse, I know the risks involved with all surgery, complications can happen in any country.’ 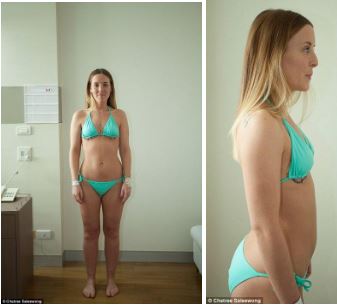 For Kylie Reader, a breast augmentation to boost her 34Bs to 34Cs will give her the confidence to wear bikinis on the beach. ‘I don’t want to wear padded bras anymore,’ the svelte brunette said, adding: ‘And I want to chose whatever swimmers I want. I’m fed up of boys telling me I’m flat chested.’ 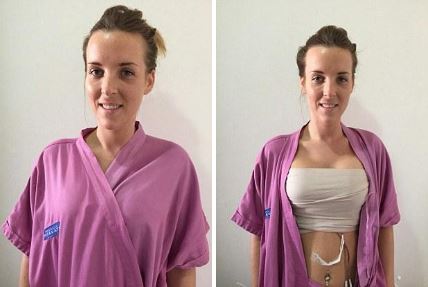 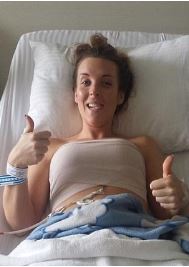 Ms Reader had her 10B breasts enlarged to 10Cs in Thailand

For 26-year-old waitress Kylie Reader, a breast augmentation to boost her 10Bs to 10Cs will give her the confidence to wear bikinis on the beach.

‘I don’t want to wear padded bras anymore,’ the svelte brunette said, adding: ‘And I want to chose whatever swimmers I want. I’m fed up of boys telling me I’m flat chested.’

Medical tourism is having a significant impact on global healthcare, and for Australians frustrated at the health system struggling under the weight of an ageing population and facing long waiting lists for elective surgery, Thailand with its stare-of-art hospitals is leading the world as a medical tourism destination.

Of the 26.5 million people who visited Thailand in 2013, 2.5 million came purely for medical reasons and that number is spiralling upwards, at an average of 15 per cent a year.

‘It’s changing the landscape in terms of price; in any facet of our life people want value for money,’ he says.

‘The Thai government promotes Bangkok as the medical hub of cosmetic treatment. Our hospitals are like hotels and are deliberate built like that to make patients feels relaxed.

‘The desire to look young and reverse time will never end and with improved technology the demand for cosmetic work can only increase.’

For more information, get a free consultation here